Throughout the week, we will post portions of our summary report from the forum on poverty. This fifth and final post answers questions about efforts to alleviate poverty in our community.

END_OF_DOCUMENT_TOKEN_TO_BE_REPLACED

Throughout the week, we will post portions of our summary report from the forum on poverty. This fourth post answers questions that audience members asked our panelists.

END_OF_DOCUMENT_TOKEN_TO_BE_REPLACED

Who are the people who will emerge as new leaders among us? What if new leaders approach things differently than we’ve always done them? Maybe future leaders don’t match our expectations? Faced by such reality, what is our responsibility in handing the reins to the new leaders?

Throughout the week, we will post portions of our summary report from the forum on poverty. This third post highlights remarks made by our panelists exploring solutions to poverty in our county.

END_OF_DOCUMENT_TOKEN_TO_BE_REPLACED

Throughout the week, we will post portions of our summary report from the forum on poverty. This second post highlights remarks made by our panelists speaking to the factors that contribute towards poverty in Fulton County.

Question 2-  How does poverty affect families, individuals, and in larger context, the welfare of communities, and even the county? Why should we be concerned about poverty?

END_OF_DOCUMENT_TOKEN_TO_BE_REPLACED 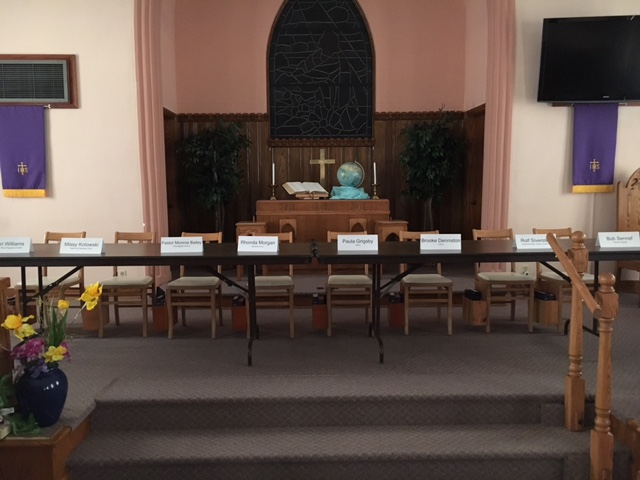 Throughout the week, we will post portions of our summary report from the forum on poverty. This first post highlights remarks made by our panelists speaking to the factors that contribute towards poverty in Fulton County.

Question 1 – What are the major factors contributing to poverty in Fulton County?

END_OF_DOCUMENT_TOKEN_TO_BE_REPLACED Thank you to all of our panelists for taking the time to share with us their knowledge and experience about this issue.  For those that were not able to attend and for those who would like to hear our conversation again, we’ve included a digital recording of the evening here as well as on our podcast (search “Canton Church of the Brethren” on iTunes or wherever you subscribe to podcasts).

Stay tuned for our summary report and feel free to continue the conversation by commenting below.

Citing scripture reminding of God’s concern for the poor, Christian Churches Together (CCT) has issued a call to prayer for the US Congress, noting that “during the last three weeks of March, the US Congress will make critical decisions that will affect the lives of millions of our brothers and sisters living in poverty. The right decisions could alleviate and pull people out of poverty; the wrong decisions will increase poverty and put the lives of hundreds of thousands at risk.”

END_OF_DOCUMENT_TOKEN_TO_BE_REPLACED

One day Peter and John were going up to the temple at the hour of prayer, at three o’clock in the afternoon. 2 And a man lame from birth was being carried in. People would lay him daily at the gate of the temple called the Beautiful Gate so that he could ask for alms from those entering the temple. 3When he saw Peter and John about to go into the temple, he asked them for alms. 4 Peter looked intently at him, as did John, and said, “Look at us.” 5 And he fixed his attention on them, expecting to receive something from them. 6But Peter said, “I have no silver or gold, but what I have I give you; in the name of Jesus Christ of Nazareth,[a] stand up and walk.” 7 And he took him by the right hand and raised him up; and immediately his feet and ankles were made strong. 8 Jumping up, he stood and began to walk, and he entered the temple with them, walking and leaping and praising God. 9 All the people saw him walking and praising God, 10 and they recognized him as the one who used to sit and ask for alms at the Beautiful Gate of the temple; and they were filled with wonder and amazement at what had happened to him. –Acts 3:1-10 (NRSV)

END_OF_DOCUMENT_TOKEN_TO_BE_REPLACED

The journey calls us at times to go where we’ve never gone before. The destination is unknown, and easily feared. What helps us move onward in the midst of the discomfort we experience?

END_OF_DOCUMENT_TOKEN_TO_BE_REPLACED

The Canton Church of the Brethren Choir, under the directorship of Carol Davis, will present “The Power of the Cross,” which is a vocal telling of Christ’s Passion and Our Redemption. It will be presented in the church sanctuary on April 9, 2017, at 10:00 a.m.

END_OF_DOCUMENT_TOKEN_TO_BE_REPLACED

The Canton Church of the Brethren is pleased to announce an opportunity for anyone interested to learn more about Buddhism.  This project will happen from May-June 2017 and is being led by Carol Davis and Colin Davis. It will consist of 3 parts:

END_OF_DOCUMENT_TOKEN_TO_BE_REPLACED

“What on earth is wrong with us?” Humanity experiencing problems is nothing new. In fact, it’s as old as the beginning of the human race. But just as God created all things good, He sets boundaries in place to maintain this goodness. When Adam & Eve crossed this boundary, their relationship with God was damaged.

What is wrong with us is that we are “boundary crossers.” We cross divine boundaries put in place not to keep us out, but to keep us together. To live peacefully in harmony with all creation. Consider that Adam & Eve’s boundary crossing was less about fruit and more about their inability to care for and respect the garden.

It is easy to be distracted from what is good for us, to coast and go about our day not realizing a boundary has been crossed. When Adam & Eve crossed their boundary, it opened their eyes to what’s important. They took a step back and asked what is going on.